Up at 6 this morning, and the oven was turned on to warm up whilst I took the dogs round.


The loaves have risen quite well, and went into the oven at 6.30, in 2 batches. 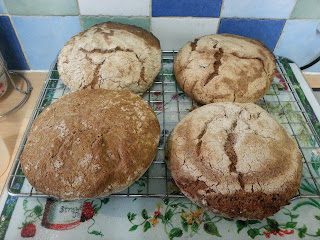 I think they are Okay, as usual I worry that they are not cooked in the middle, but short of cutting them open there is not a lot I can do about that. The smell is good, and the crust is crisp, they would not win prizes for looks maybe but I’m sure the taste will make up for it. They haven't risen as much as I would have liked, but then that is a modern idea, rustic bread is not as light as mass produced.
And even though the first bite is with the eye, the flavour should be alright.


Only time will tell, and I’ll be worried about the reaction, assuming they sell, for the next couple of days.
Posted by Moontide at 00:48