As some of you may know, (and if not, you should be reading my other blog) I have been baking bread for several years, in fact I haven’t brought any bread for home consumption since 2009.


When we used to live in Kent, I sold bread to work colleagues once a week, and covered my costs, but the one of the things that I was told was that I was undercharging, and also that I had a commercially interesting product range.


Fast forward to now, here I am in Devon, and still making bread. I am still expanding the range of breads that I am happy making, but I’m not selling any bread at the moment. I have been on a three day course, which taught me a lot of useful things, and I must admit I have been thinking of starting up again.


To cut a long story short, I have been feeling that I needed a change of direction. And this was sort of confirmed to me in other ways, which I won’t go into here.


I was in town a while ago and spotted a new wholefood shop, they had some bread for sale, and I thought to myself “I could do that.”


I went in an introduced myself, and offered to provide a sample of sourdough, which I did, and it was well received. In discussion with the lady running the shop, we talked about the commercial aspects of my supplying her with bread, and I found that, in Devon at least, the process is not as complicated as I had thought.


So I have now applied to register my kitchen, and am hopeful that I can shortly start to take bread making to the next level.


Initially, I will be making a few of my favourites, Sourdough, Ciabatta, and my cheese rolls to name the most likely candidates.


I want to start off small, and not try to do too much at first, until I get a feel for the operation and it’s potential. It would be so easy to charge in, like I have a tendency to do, and find that for whatever reason it’s not working. So baby steps will be the order of the day.
To leave you, here are a few photo's of my intended range. 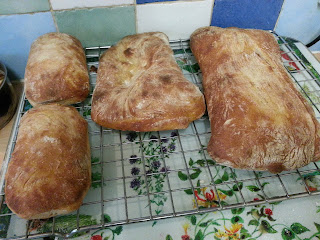 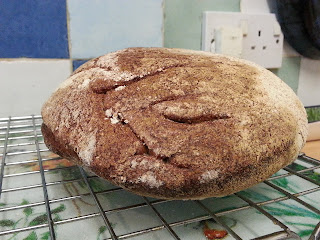