It's very often the little things that turn into the big things. The experiments that succeed or the trials that everyone loves.

I found a recipe for Potato Rosti that used Sourdough as a binding agent and made some with my discard starter. I thought that they tasted pretty good and as they took little time I decided to make a few for the Lovelife show. I didn't really think they would be popular, but I liked them and could always eat them myself.

Well they sold out almost immediately and I could have sold a load more as well. If you can believe the things people say, I can expect orders.

They are very easy to make, you need

First cut the potato into chunks and put into a processor. (If you don't have one use a hand grater) You need small pieces.

Drain any liquid and mix the potato in a bowl with everything else. Now is the time to add Salt, Pepper or Herbs if you wish.

Mix till you get a paste.

Line a tray with parchment and make the mixture into balls, placing them on the tray, or you can use cooking rings.

Bake at 160 Degrees C for around an hour or until browned and crisp. Eat warm or allow to cool for storage.

They can be frozen. 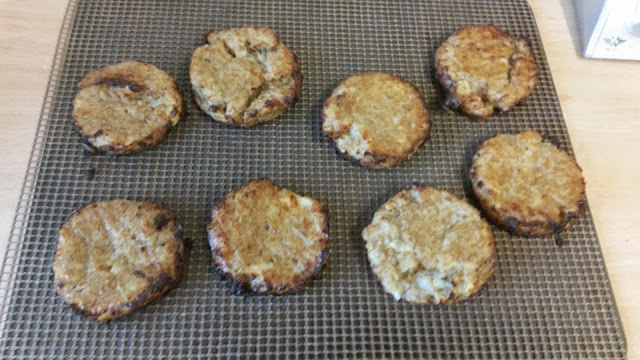